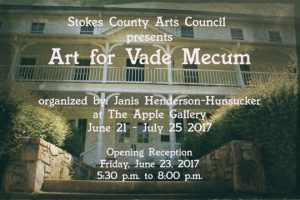 Janis Henderson-Hunsucker has partnered up with the Stokes County Arts Council to have several events in July to raise funds for the property.

The Stokes County Arts Council will host an exhibit “Art for Vade Mecum” in the Apple Gallery June 21 through July 25. An opening reception is planned for Friday, June 23, 5:30 p.m. to 8 p.m. at the Stokes County Arts Council, 500 N. Main Street in Danbury. The public is invited to attend the opening reception. This event is being organized by Janis Henderson-Hunsucker. 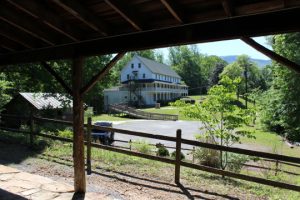 Henderson-Hunsucker is a mixed media artist. She received her Master in Fine Arts Degree from Arizona State University in 2000. She acquired her BFA from East Carolina University. Henderson-Hunsucker studied for one year at the Cardiff Institute of Higher Education in Cardiff, Wales. In 2000, she relocated to New York City to work at Christie’s Auction House in the Digital Photo Studio as an image processor. After working in the “Big Apple” Henderson-Hunsucker was tapped to work at Sertoma 4-H Educational Center and relocated to Stokes County. Presently, she is the Visual Arts Teacher at North Stokes High School, having previously taught at Hill Arts Magnet Middle School in Winston-Salem. Additionally, she is a member of the Friends of the Sauratown Mountains and can be found leading historic tours at Vade Mecum the first Saturday of each month. Henderson-Hunsucker serves on the board of the Stokes County Arts Council and is Visual Arts Co-Chair of the SCAC Visual Arts Committee.

Henderson-Hunsucker worked tirelessly with many local residents to Save Sertoma when NCSU tried to sell the camp property in 2013.

“I worked at Camp Sertoma for over 10 summers and Vade Mecum is near and dear to my heart. I am so excited we won the fight to save the property and it is now part of Hanging Rock State Park,” she said. “Many of the buildings on the property are in need of repairs because they have sat dormant for four years. My goal is to raise money so that the cabins can be rented, the Olympic sized swimming pool can be reopened and folks can rent the chapel and gym for weddings. I would like to see the hotel cafeteria renovated into a café that could serve meals to folks riding horses, mountain biking, and hiking on the property. I know the art show, classes and concert I am organizing are only part of the solution, but anything will help.”

Henderson-Hunsucker went on to thank the artists who have donated work for the art show. “Stacy Buck donated a wallet she made, Kay McHenry gave us four fabric bags, Kitty Ray Brown donated a beautiful photograph of stacked rocks on the Dan River. In addition local painter Angela Degraff Torrey donated a painting of Stokes County, and former camp staffer Chris Stafford gave us a painting. This show would not have been possible without their help. My husband Greg Hunsucker took many photographs of Vade Mecum and I created quilts, prints, and paintings for the show.” 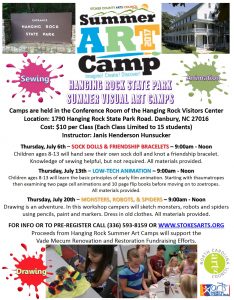 All Hanging Rock State Park Art Classes are taught by Janis Henderson-Hunsucker. Mrs. Henderson-Hunsucker teaches at North Stokes High School. Janis has her BFA and MFA in studio art and has been a public school teacher for the last 16 years. 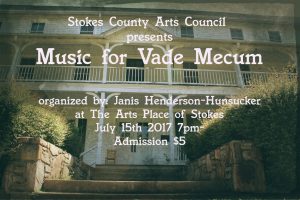 The public is invited to attend Music for Vade Mecum on Saturday, July 15 at 7 p.m. at The Arts Place of Stokes, 500 N. Main St., Danbury $5 Admission. Tales of staff pranks, misadventures and ghost stories will be told in a camp fire like setting framed by music by Greg Hunsucker and Skip Staples.

“The goal of Music for Vade Mecum”, says Janis Henderson-Hunsucker, “is to raise funds to restore the buildings and facilities at the former Camp Sertoma property which is now part of Hanging Rock State Park. Attendees will hear stories from 1983-2013 when the property was a 4-H summer camp along with

Henderson-Hunsucker serves on the board of the Stokes County Arts Council, teaches art at North Stokes High School, and leads historic tours of Vade Mecum with Friends of the Sauratown Mountains.

Come to Music for Vade Mecum and learn why this spot in Stokes County is so special to so many people from all over the world.